I understand you, guys on the third and fourth screenshots =(

I watched Fate Stay Night and Fate Zero but never considered myself as a fan of this universe (and I’ve never played a single Fate game). However, I can’t just drop Fate/Extra despite the fact that it’s first episode was messy as hell. Just because Shaft.

Character design is not so wonderful though (a lot of familiar faces, right?)

This was one of the best concerts I’ve seen in years. The sound in London Music Hall was waaay better than at the Exodus’ show, Anthrax played virtually all their songs I’d want to hear live (except for “I’m The Law” and “N.F.L”, shame on them) — just a couple of pieces from their two latest albums (not their best albums, certainly) and mostly oldie but goodie from “Among The Living”, “Spreading The Disease” and “State Of Euphoria”. I didn’t expect that I’d enjoy the show so much — yeah, Anthrax is probably in my top 10 favorites but A) they are kind of old; B) as I said, they wouldn’t have lost much if all their albums after “Persistence Of Time” didn’t exist.  But seems that the atmosphere of a packed concert (the event was sold out) and music I’ve been listening to for many years (and therefore could yell words here and there) improved the experience dramatically.

Random notes: when we just arrived there had already been a huge line in front of LMH. I’d say that 90% of people weren’t wearing anything warmer than a hoodie and we’re really worried that there wouldn’t be a place to hang our jackets. Turned out that LMH did have a coat check but it costed $4, so no wonder many people decided to spend their money on something else instead.

Havok have released 4 albums and 3 of them are pretty good so I’d been looking forward to hear them live — and the band lived up to my expectations. They played without any mistakes and sound was good, I only wish they’d played more songs from their “Time’s Up” record. Their new bassist is a badass, although his appearance stands out a bit (and those illuminated dots on his bass, oh boy…)

I didn’t really get all the euphoria related to Killswitch Engage but apparently these guys are very popular — I’d estimate that half of the crowd came there just to listen to their songs (for me it sounded like they played 2 songs but repeated either 5 or 6 time). Holy Diver was awesome though, especially because Beladonna was singing the last verse.

Beladonna is a great live singer, I really was pleasantly surprised by this fact (and he’s very active on stage despite his age). The stage for the Anthrax’ part of the show was significantly re-done — a huge platform for the drum set with steps from either side, smoke machines, all that stuff.

Steve twitted this video, so I guess I can share it as well =) This is some WIP of a new lightmapper that’s being developed at DE

WIP test-box of our new progressive lightmapper (called 'Nova' to confuse ourselves)… Warframe's lighting is mostly 'baked' (slowly) but now artists get near-realtime feedback to how results/bounce light will look. pic.twitter.com/rCJOKK62gW

I wouldn’t say that dystopia is my favorite book genre, however after I had already read the other two most famous representatives of dystopian fiction — 1984 and Fahrenheit 451 — I had no other choice but to compare them with the Huxley’s book.

Long story short, the world shown in Brave New World isn’t as grim as Orwell’s and, in general, looks like a nice place to live and I’m not going to declare pretentiously that it’s impossible to survive in a place where humanity doesn’t have fiction, religious or philosophic books and where it’s impossible to find an art-house movie. I wouldn’t blame anyone who wanted to move into such a world. No diseases, no wars, no struggles, no poverty. Soma =) Even those who revolt against the existing society do not get killed, just exiled.  This world is not ideal — “everyone belongs to everyone” is too much to my taste, as well as constantly being surrounded by other people. Yes, the idea of predetermination looks sort of ugly and inhumane; yes, you have to choose (if you’re a lucky Alpha) between your vocation and your stable life; yes, from our perspective the life in the Brave New World’s 25th century may seem rather dull. But it puts the depressing society of 1984 on its back in no time and lucky we are if in the future we’re going to have a choice between these two levels of being controlled.

A couple of words about characters. As usual, I didn’t like any of them. I sympathized with Lenina a bit (because “Mr.Savage” was acting like, you know, a savage) and I enjoyed how rationally and calmly European World Controller (Mond) explained everything to The Savage, Marx and Helmholtz. The trio of main characters left virtually no emotions, except some disgust towards Marx’ indecision and his attempts to clear his name at all costs.

P.S. At least now I know the roots of this “O Brave New World” expression. Also was kind of surprised that the phrase “I went and ask if I mightn’t go with you” actually meant that the guy asked if he might go with them.

Now we have the release date!

Kekkai Sensen and Beyond

Probably the main disappointment of the fall season. The first Kekkai Sensen was meaningless but fun. Not because of its characters but more because of the city the anime was taking place in. It looked relatively fresh — former New York City, now full of aliens, vampires and other suspicious creatures. The second season was virtually on the same level in terms of plot (plot? haha) but fun mostly evaporated — all tricks were familiar, all characters had been seen and Kekkai Sensen’s great ending was replaced with something totally generic.

I’m really glad we didn’t drop this anime. The very first episode made me feel as if it was one hour long — our two girls were moving (touring?) from one indistinguishable point to another, talking about typical things girls in a post-apocalyptic world would talk. Usually, in such series the world plays a very important role but the world Chito and Yuuri live in is pretty empty and bland (buildings, weapons, old tanks, robots, two fish, gods). But two or three episodes later the main duo managed to grab my attention and then didn’t release it until the final titles. Fearless and slightly aho Yuu is the main star here (in my opinion, of course, as Asuka is the main star… hold on, there can’t be two opinions who the main star of Evangelion is!) but unlikely she would shine so brightly if she was without Chi, who is shy, likes reading and regularly tries to stop Yuu’s attempts to eat all edible and inedible objects around her. What happened with this world? How many people have survived? Probably I should’ve asked these questions and demanded answers but, frankly, I didn’t care about such things as long as I had the next portion of Yuu’s legendary “Let’s eat this fish!”

What I can say about this one… Tsuki Ga Kirei handed over the baton of good romance anime accompanied by awful animation (this anime is almost ready to receive the Jiggly Jiggly Heaven award) to this show. I liked Just Because, honestly. I don’t even want to start complaining about characters — yeah, the main hero is a typical Ordinary Japanese School Student (but with parents), therefore it’s obvious that there should be at least two girls who are in love with him (and Komiya is kind of cute). I sincerely rooted for Morikawa and Souma and I’m really happy that they figured out at least some solution that might allow them to be together. Souma, trying to overcome his fear of dogs or Morikawa, hoping that someone would say something about her new hair style — it was super-cute. There were weird moments, I mean, c’mon — am I the only one who thinks that swinging an imaginary bat and then running around the field during an imaginary match (while Morikawa were playing her trumpet) looked slightly insane?

Talking about insanity… unfortunately a romance anime implies that characters will be running. After they’ve been rejected; because they don’t want to see the one whom they’re not ready to confess to yet; to cram school… And animation of run in Just Because is insanely horrible. It were the worst runs I’ve seen. And trust me — all those high school students run a lot here. 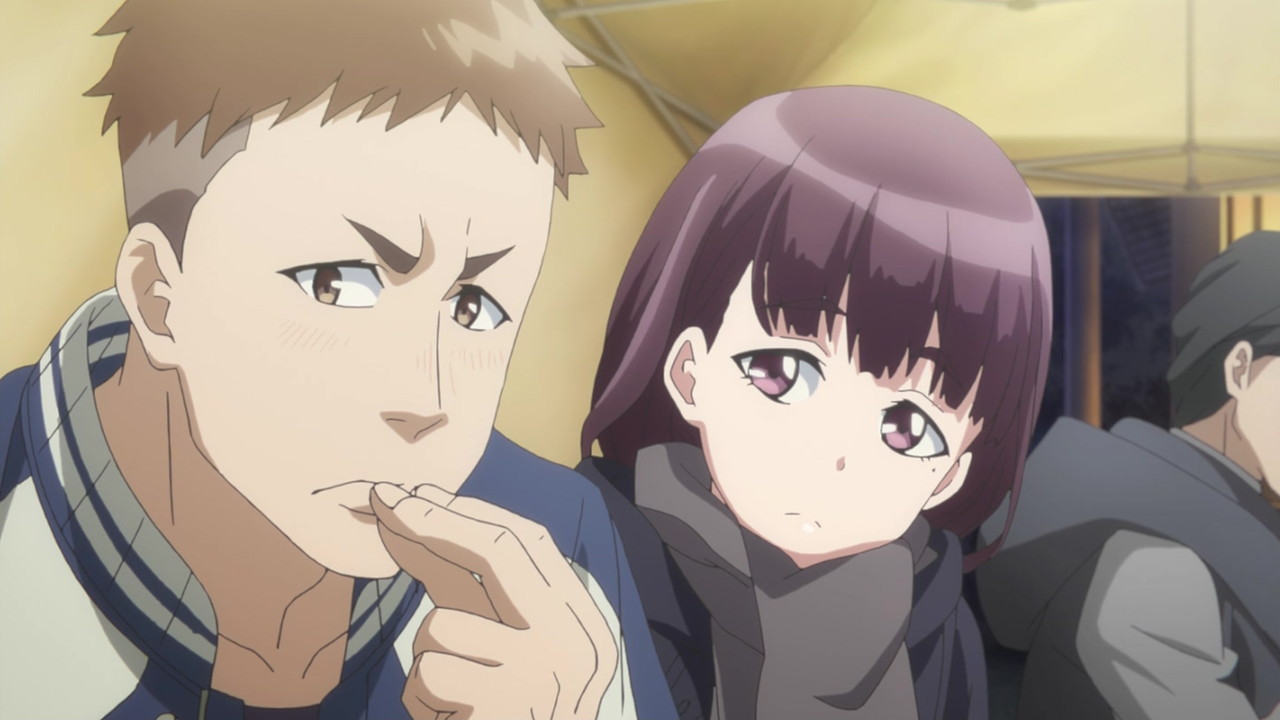