To prove my stupidity one more time I finished this, hm, game just one month before the anime starts airing. I aggravated everything even more after discovering that the true ending couldn’t be achieved after the first play-through — and watched other endings on youtube (you know, once you started doing stupid things it’s very difficult to stop.) Well, at least now I know that the show is going to be decent =)

Basically, it’s the same good old Steins;Gate but instead of the “mad scientist” Hooin Kyoma we have a questionable pleasure to observe his depressed version, Linthalo Okabe, who couldn’t save Kurisu and gave up on everything. All the gang is here though — Mayushi with her famous Tuturuu♪, supa-hacka Daru, Faris Nyan-Nayn and so on. Among the new characters it’s impossible not to mention Maho. First of all, she is one of the main heroes here. Second, all five in-game jokes are dedicated to her.

Steins;Gate’s gameplay is an ideal representation of what any game should be — you systematically press a single button scrolling dialogs. Very convenient, because I could play using one hand and holding a beer in the other one. There are a few points where the player should make a choice but all these key moments are based on whether you’re going to use your in-game smartphone or not. Until the very end I didn’t figure out what button had to be used in order to answer a call or a RINE message, so I just went with the flow and managed to get an ending, which can be considered as a “good” one. Ignorance is bliss.

All I feel while watching an episode of Darling in the FRANXX is the urge to re-watch NGE and Gurren Gagann.

I hope I deserve this big Toblerone 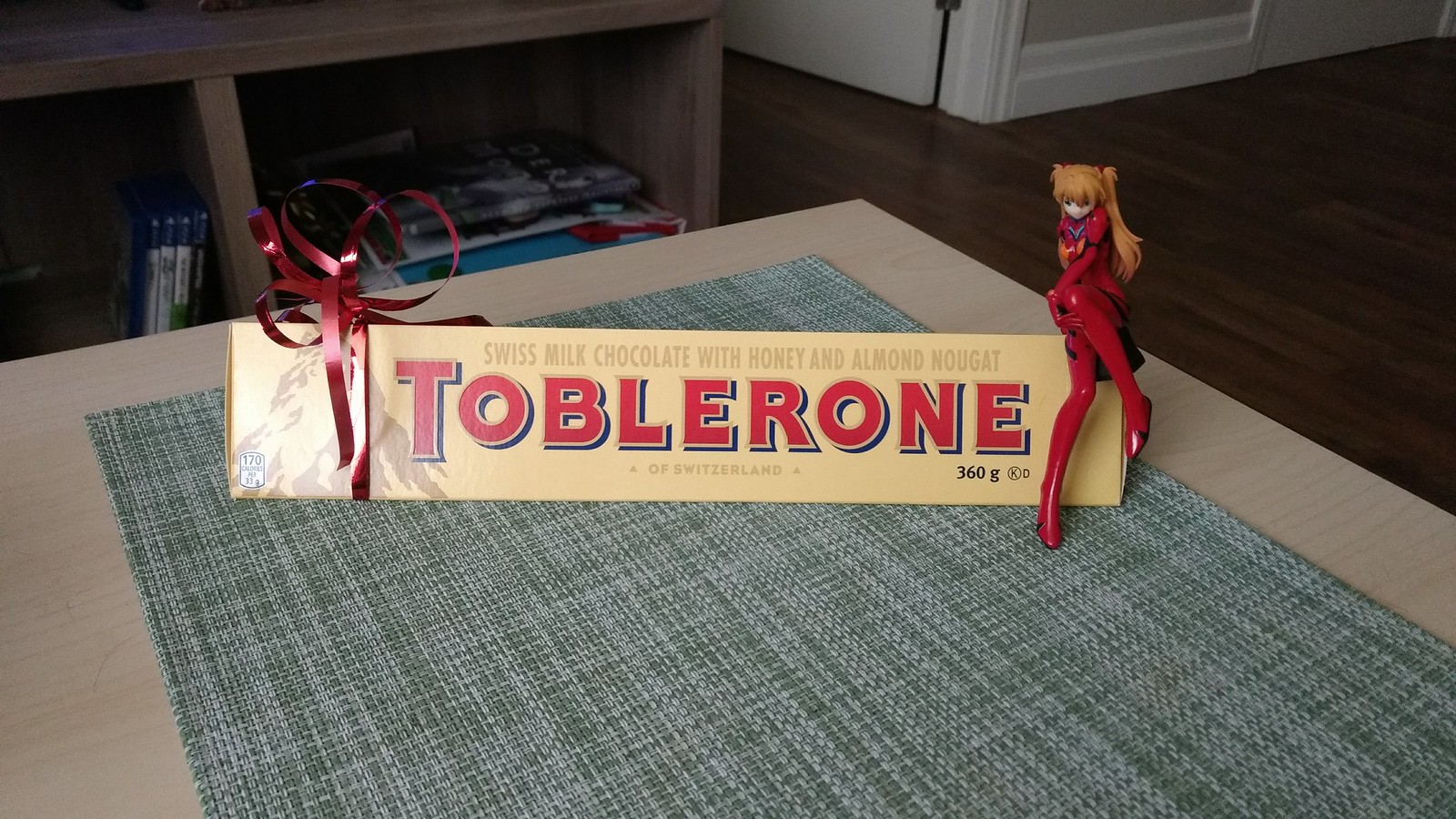 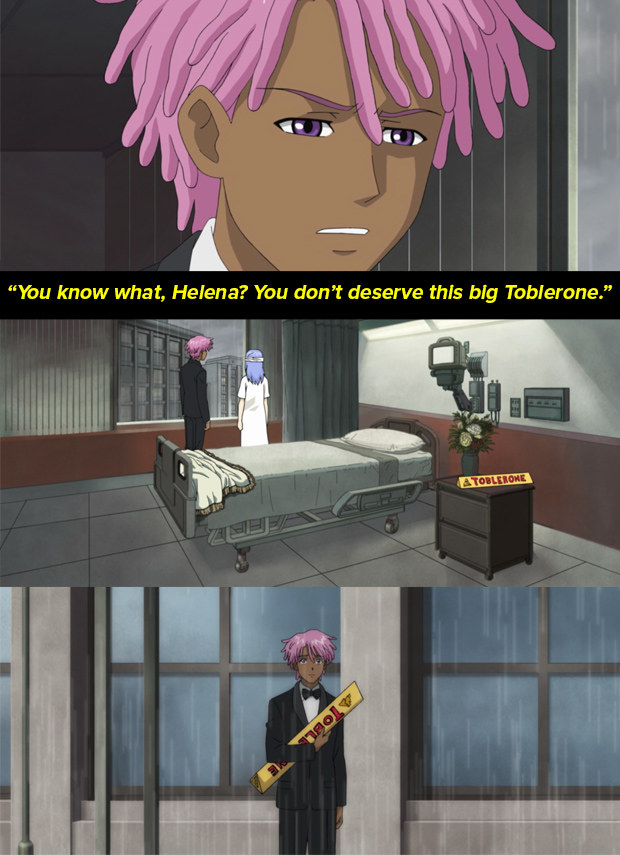 Went to a Mudmen concert yesterday. These guys proudly call themselves Canadian Celtic Rock Warriors and it’s hard to say that this title is undeserved. Their own songs are good (on the latest album, Old Plaid Shirt, they became slightly more lyrical and slightly less, you know, “Drink and Fight!”-ish but that’s still nice, can’t get out the title song out of my head), their cover songs might be even better — all people enjoy listening to good old Irish songs like “The night that Paddy Murphy Died” or “Irish Rover”… But what makes Mudmen unique is that the band was founded by two brothers who play bagpipes! Bagpipes for the win.

I would also praise the Mudmen’s drummer — great job!

It was a bit weird but fun that one of Campbell brothers before the show started went to every table and offered earbuds, mentioning that “it’s going to be loud”. After the Exodus concert I guess we have nothing to fear. The same brother was also making faces when someone was filming a song, smiling all the time and in general looked as if playing at a tiny place with people seating had always been his biggest dream.

London Music Club (yep, now I’ll always be confusing LM Hall and Club) is a nice small place, with fine beer and decent sound. The owner himself does a huge chunk of work — he was at the doors checking tickets, he took away empty glasses and bottles and once I met him in the men’s, hm, washrooms when he was cleaning up after someone, evidently, had thrown up. It’s great that this club exists (and it’s located just 3 blocks away from our place, hehe), so thanks to him and other staff. The audience consisted mostly of people whose average age is closer to 50 or even maybe 60 — that was surprising. I wish I’d be like them when I’m 50, that I’d be able to go to club, order a couple of beers and listen to good music. 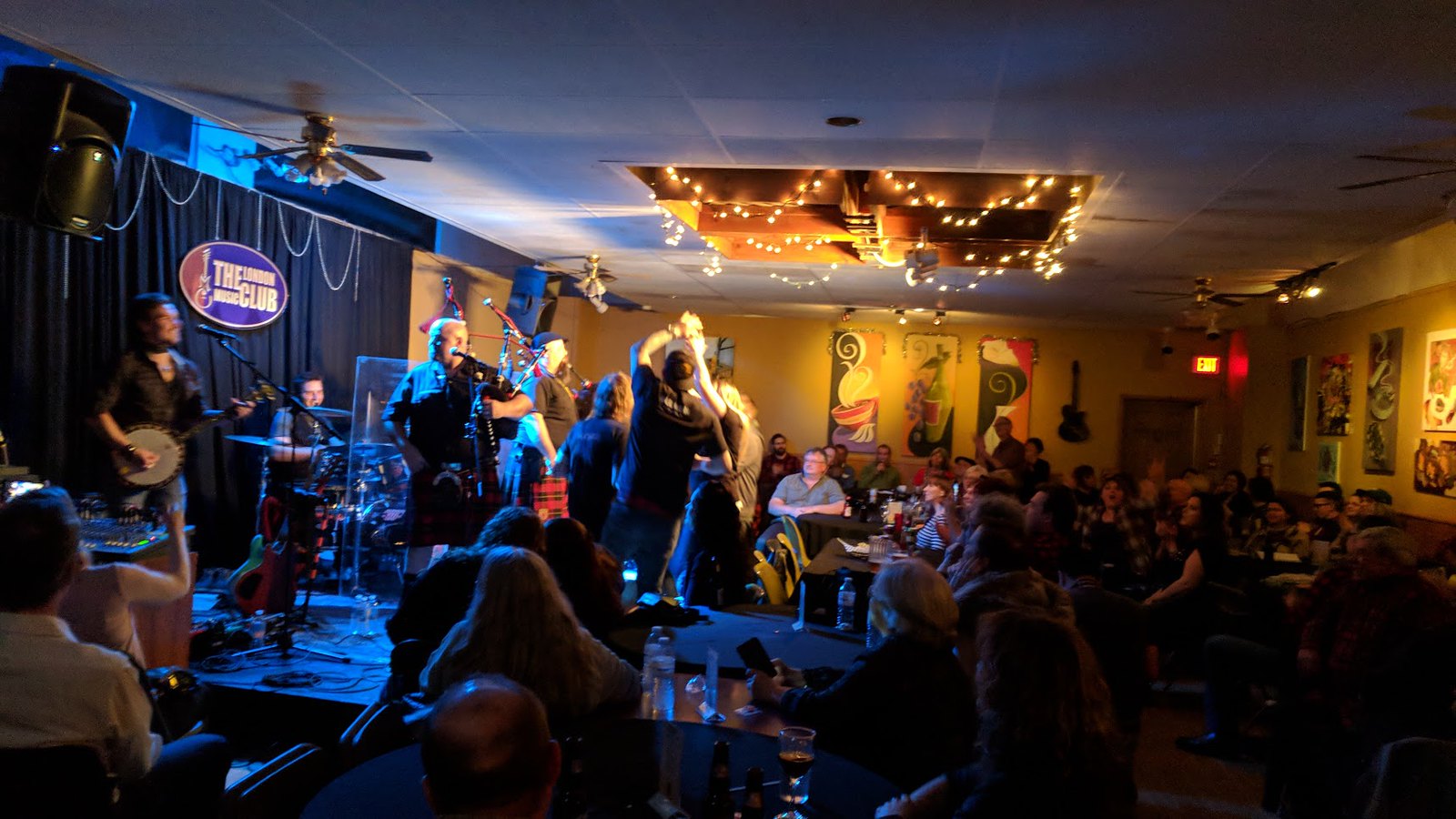 Violet Evergarden (the character) made quite a progress in her understanding of human feelings. The most amazing thing is that it’s not clear why this happened and when she became so susceptible and emotional. Probably we should think that books she read influenced her that much. In general, so far the anime is rather meaningless and inconsistent, not even taking into account the tear-squeezing nature of the show. But, man, its visual is gorgeous — and Violet Evergarden is worth watching just because it this factor. It feels that KyAni can afford spending on a single TV episode as much as some studios use for a movie production. Going to spam a bit with screenshots of Horizon: Zero Dawn. This is a beautiful game and I can’t stop saving images after I discovered that a screenshot can be taken just holding the Share button for a second. I can’t even find the words, which would describe what a job the rendering department of Guerrilla Games and the department responsible for the world layout and level design did. The sky, clouds, sun, rays, trees, grass, rivers, waterfalls — everything is exactly how it should be.

Aloy, unfortunately, turned out to be a slightly annoying character, who’s supposed to be someone we should sympathize with (she’s an outcast, the tribe hates her and is afraid of her at the same time and so on and so forth ) but in reality her unstoppable boasting and “I! I! Me! Me!” may drive nuts even those of us who have a lot of patience (something I’ve never been able to call my strength).

Virtually the first conversation Aloy had with someone who wasn’t Rost immediately transformed into her blaming the other guy: “Why don’t you want to talk to me? I’ve been an outcast for the whole life, but you have a focus and I thought you’d be different…” What if he is just not in a mood for a chitchat? And of course this guy is a villain. Or her answer to a questions like “Is the caravan survived?” Of course, it’s “Yes, I got there in time”.

Well, I complained a little so it’s time for wonderful screenshots full of interface elements because I’m a lazy asshole who doesn’t turn the photomode on. 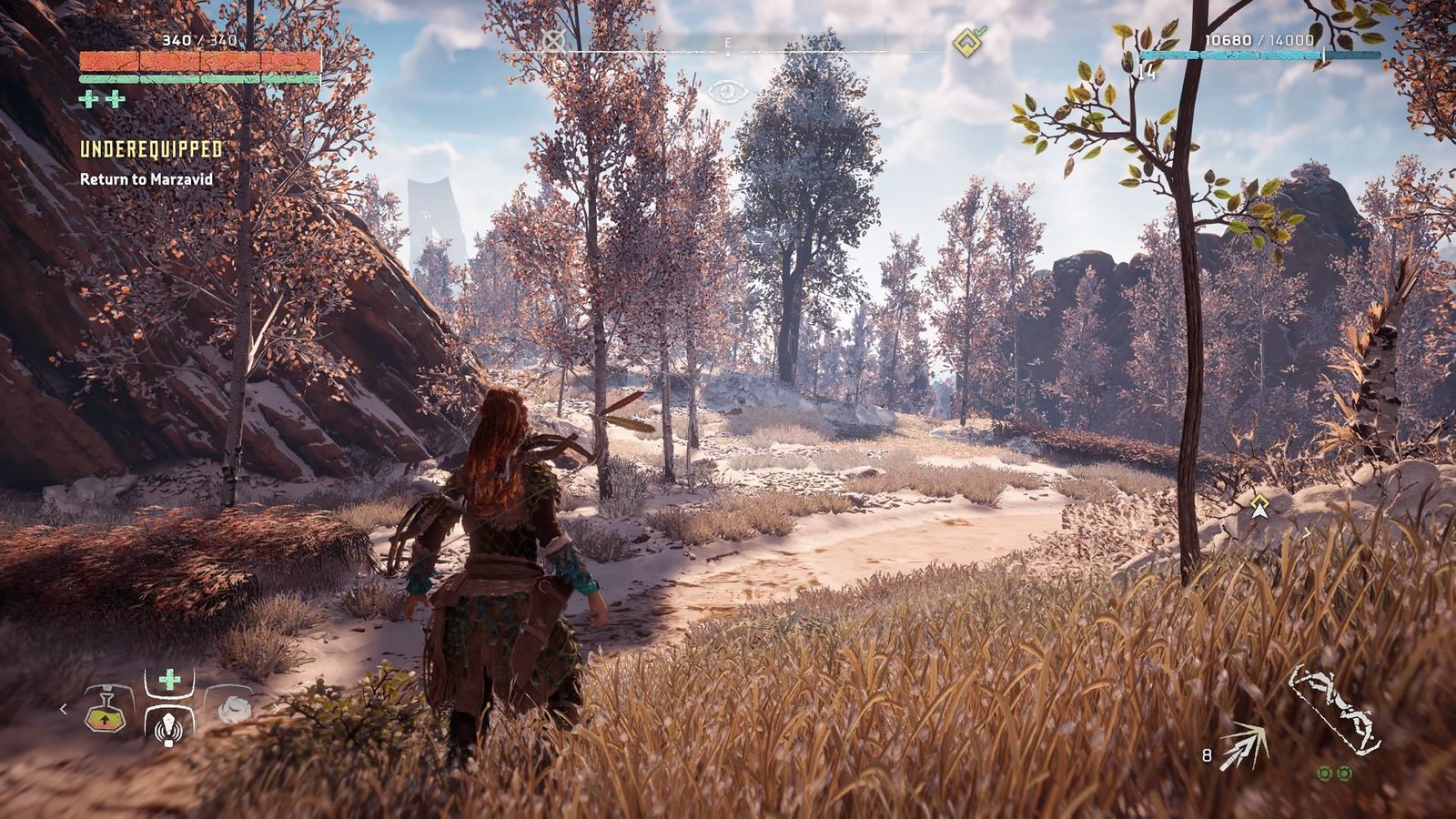 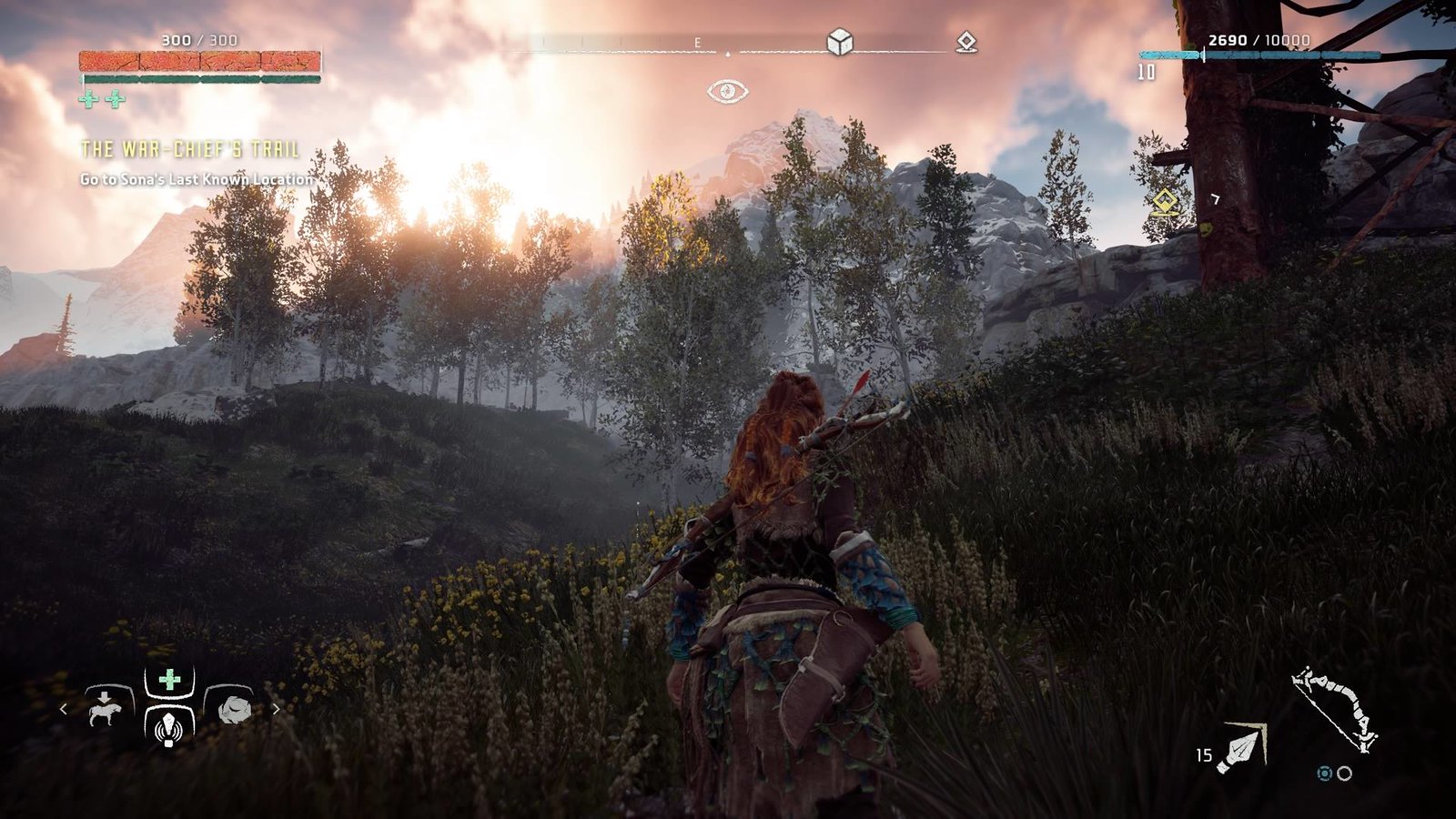 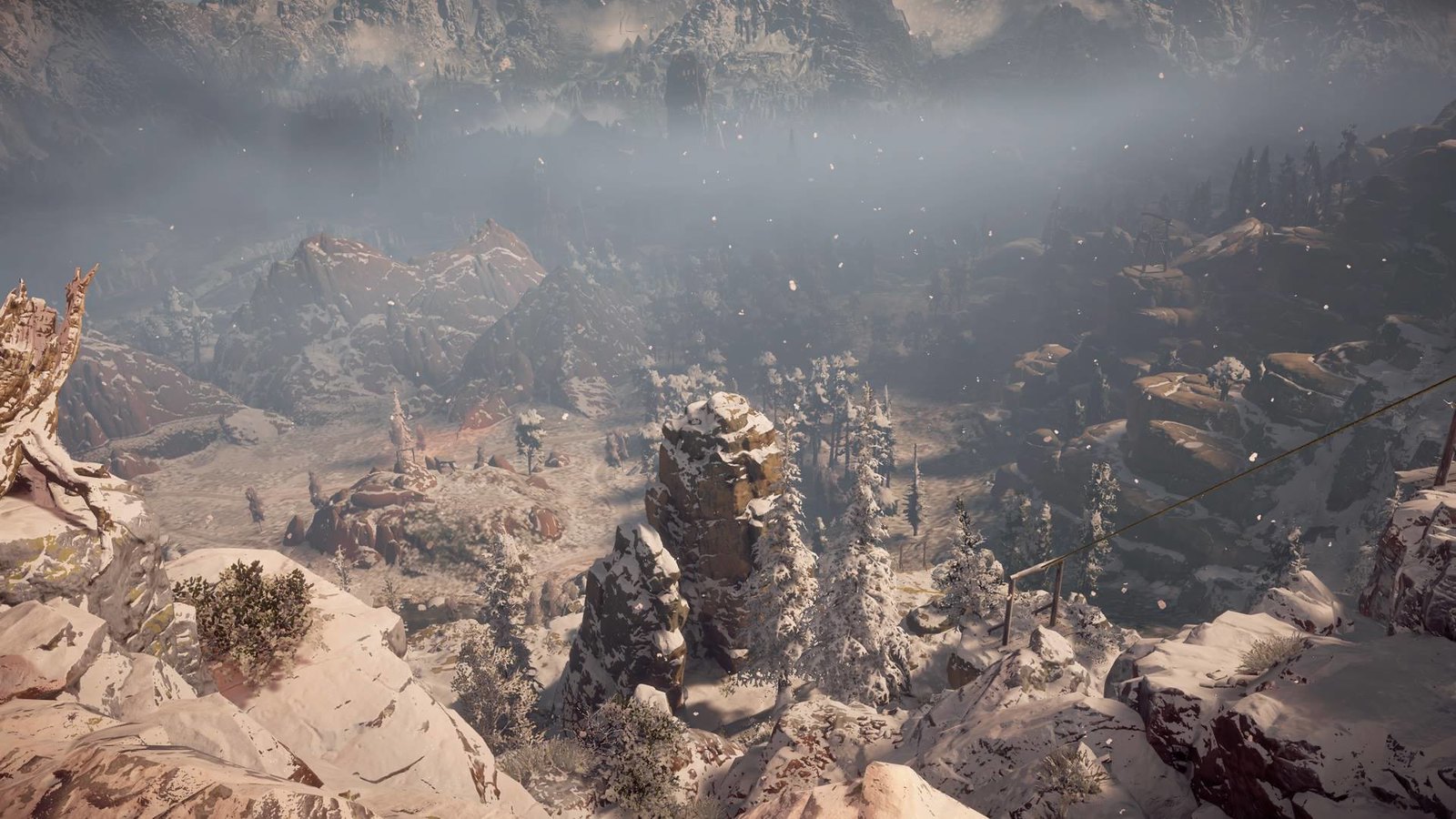 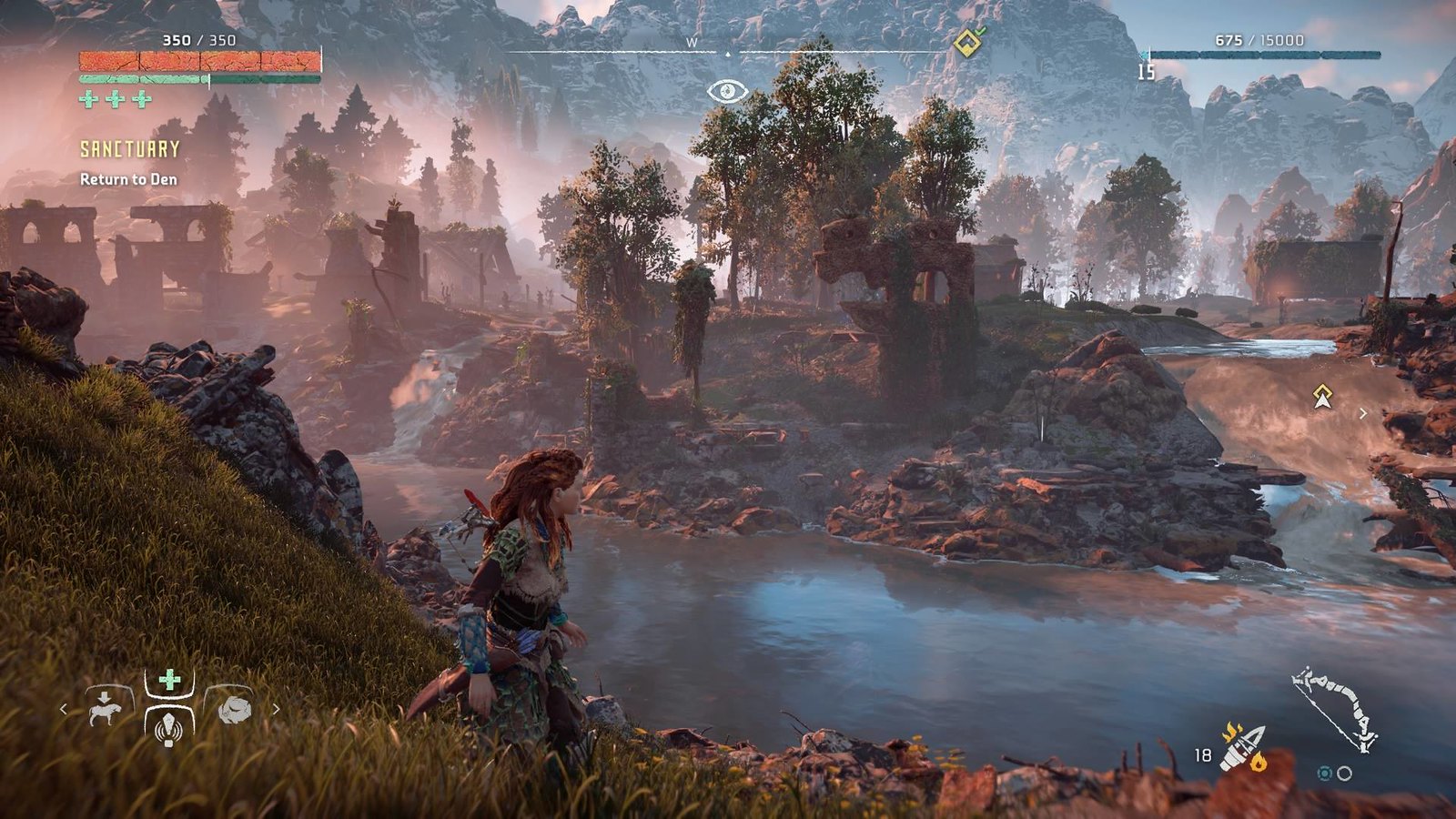 This place is probably my favorite now — it’s simply wonderful 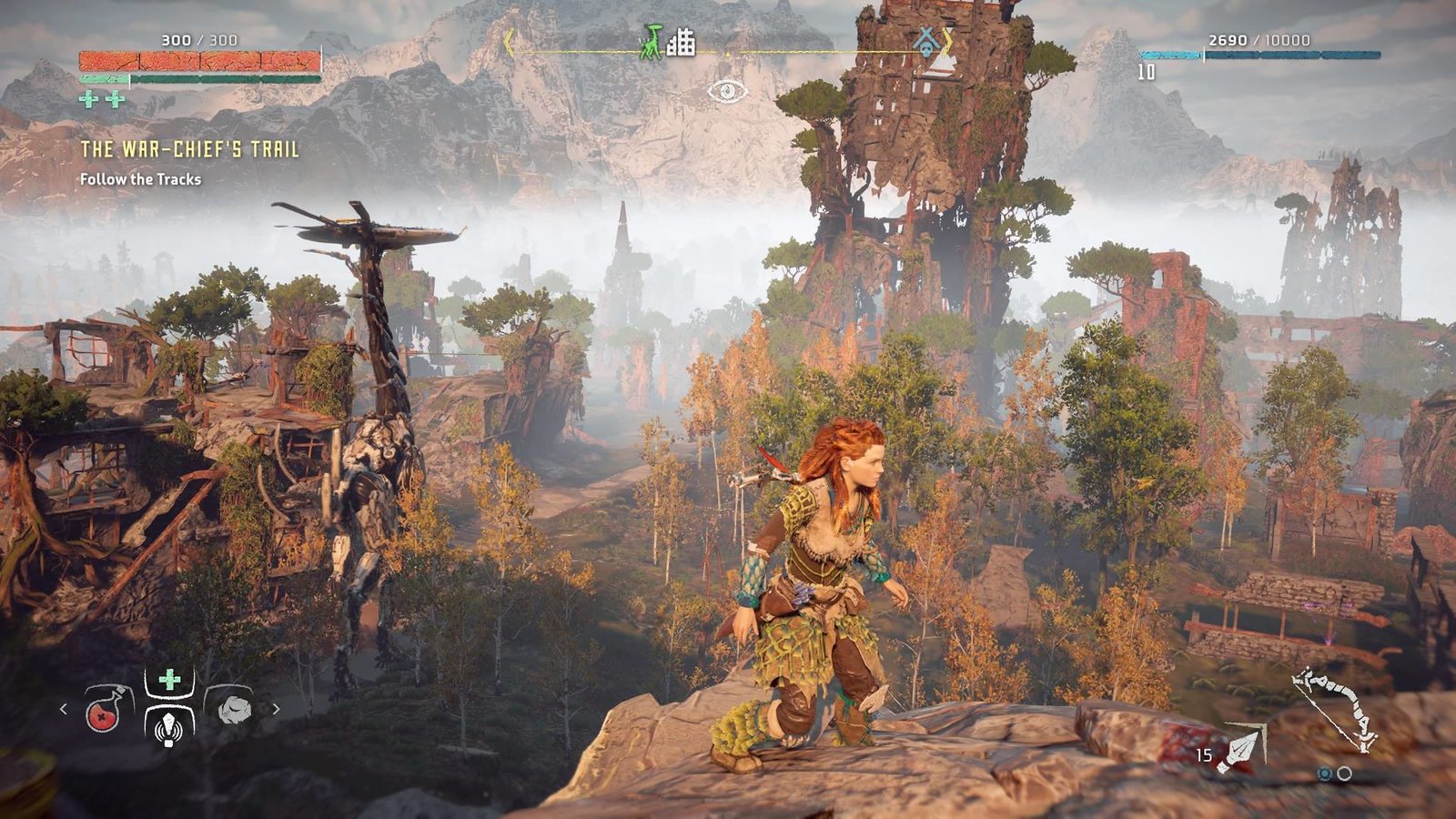