As usual, the best (or maybe the only good) thing about that is comments to this tweet.

Get your first look at Henry Cavill in The Witcher! pic.twitter.com/1O2eWS1MkP

One stupid thought I can’t throw away from my head after visiting Japan is that I want to learn Japanese. I bet that almost everyone who is interested in anime decides at some point that watching Monogatari series without subtitles is a reason good enough to invest time and efforts into studying a new language. Moreover, it’s not impossible, I know a few people who are able to read, write and hold a conversation in Japanese.

Frankly, I’ve never seriously considered learning this language one of the top priorities in life but having seen this country with my own eyes and planning to travel there again as soon as possible — I gave up and started playing with hiragana and looking up the grammar.

Not sure if I’ll be able to achieve any result worth noticing, too many thing scare the hell out of me. My English is far from being any good and it’d be more useful if I spent additional time improving it. Japanese isn’t a super widely spread language and unlikely knowing it will pay off. It’s difficult — whereas I was happy as a clam today when I managed to write わたしわあららぎです almost without having to loop up every single syllable (I honestly think that writing familiar words is the best way of memorizing kana, although I have no idea what I’m going to do about kanji; and no, it’s not that I associate myself with aforementioned あららぎ) — I can’t even imagine how much time it’s required to reach the level of a, say, 6 years old kid.

Anyway, it’s said that learning a new language is a healthy way of wasting one’s spare time, so maybe all that won’t be terrible.

It was the last show I finished this summer season and, despite the fact that mostly it was enjoyable, Steins;Gate 0 can’t hold up against its predecessor.

The only fact that Kurisu, who’s an AI in 0, is still the best and most likeable female character (Daru is unbeatable on the male side but the competition there isn’t especially thrilling and we shoudln’t forget that to a huge degree Steins;Gate is a harem anime) can tell us everything we want to know. Yeah, Maho has her own charm, Faris is still nyan-nyan but it’s Kurisu whose lines clicked in me. The best and the most powerful moment of this anime is also related to her — when Kurisu, herself, offered to destroy Amadeus. Yeah, we saw it coming, yeah, it’s a mandatory sacrifice of a friend of the main hero — but our tsundere scientist managed to make it believable and emotional. And of course, I’m saying this not because I can’t resist any decent anime tsundere.

Surprisingly, the anime was rather different comparing to the route I finished in the game. Off top of my head, in my playthrough Okarin didn’t become the mad scientist again, I didn’t see the facility Kagari was held in — and the anime didn’t show the link between Yuki and Kagari (at least I don’t remember it did), we didn’t see Moeka’s obsession with FB.

Wrapping up — not bad, but it definitely might’ve been more impressive.

Instead of writing that we’re back from Japan and sharing my excitement I’m going to write that Sakurajima Mai is an amazing character and it’s really, really sad that her arch took just 3 episodes. Considering the Bakemonogatari-ish nature of Seishun Buta Yaro it’s unlikely we’ll see her much later on. Having to wait for a week until the 4th episode comes out, I even watched again the first two episodes of Bakemonogatari with Senjougahara.

Wake up at 6am, short trip to Toronto, a couple of hours at the airport — and we’re taking off! Japan awaits! The next week is going to be crazy.

I’ve been quite busy at work recently and didn’t have much to write about but can’t miss a chance to celebrate a pretentious milestone — a couple of days ago I hit a mind-blowing 500 completed titles on MAL! Yeah, for many people that won’t sound impressive — especially considering that I’ve spent, I don’t know, 13 or 14 years to finally get that “500-titles-kun” badge.

So now I’m going to wipe away the tears and try to remember a couple of boring facts about those countless wasted hours.

I still remember my first three anime shows (were on CDs) — Ninja Scroll, Ghost in the Shell and Lain. I watched Pokemon but for me that wasn’t exactly an anime (and I think I didn’t add it on MAL). Sailor Moon I watched much later, not a TV version but the original Japanese one, with subtitles. So I was shocked when learned that main characters’ names were translated for the Western market and people don’t know who Usagi or Makoto are.

There are 10 shows on my list which, in my opinion, deserved the highest score. And I watched almost all of them a few times (except for Bakemonogatari — but I’m going to amend this). The record belongs to (of course) NGE. I used to watch it at least once a year and we’re slowly re-watching it again now.

NGE was (and is) my main anime obsession (you must be obsessed with a show to watch it at least 7 or 8 times). And it’s kind of fun that I dropped this anime on my first attempt to watch it. It was a terrible dub version, and all those robots and my-father-doesn’t-like-me characters were too much for my young innocent brain. On my second attempt though I capitulated. It was absolutely beautiful. I watched episodes before sleep, than dreamed about Evangelion at night. I cried my eyes out when Asuka was slowly descending into madness. I fell in love with her. And I fell in love with Evangelion and Gainax.

Three Gainax shows got 10 from me. Moreover, I watched almost all their shows I could find — no other studio so far has made a similar impact (the next one is going to be Shaft probably). I still want to believe that the day will come when I’ll be able to add another anime made by Gainax and select 10 as its score. But even if they don’t come up with new shows — the existence of FLCL, TTGL, NGE, Honniamise and KareKano justifies everything they’re doing now (yeah, even selling tomatoes).

The lowest-scored anime I have on my list is Tsukuyomi: Moon Phase. And it’s a shame that Shinbou and Shaft are responsible for that. I would’ve dropped it nowadays — but back then you had to watch everything you manage to lay your hands on.

Seems that I’ve finished only three sports anime: Ping Pong the Animation, Yuri On Ice and Battery. Well, theoretically I could’ve added March Comes in Like a Lion and Ping Pong Club — could have but I won’t.

The longest show I watched is FMA: Brotherhood. Not sure whether I should be proud of myself or not — but I didn’t watch a single episode of Ranma 1/2, Naruto, Gintama, Bleach or One Peace.

Sometimes even a single frame may give a reason to drop a show. This is one of such examples. That laptop on the background… I had to rewatch this scene because initially I couldn’t believe my own eyes that it could be so terribly drawn.

Nastya drew this Kratos and I kind of  like this art =) Anime about vampires have always been ones on my least favourites. Yeah, it’s possible to find a couple of exceptions (Hellsing Ultimate and… Monogatari maybe?) but mostly it’s utterly generic stuff, feeding and striving on stereotypes. In addition, my person Worst Anime Of All Times is also about vampires. Unfortunately, P.A. Works’ Sirius the Jaeger couldn’t change my negative attitude towards this genre.

To be honest, P.A. Works didn’t even try much. It was like “okay, what do we know about vampires? Hm, they drink blood, like gothic-style clothing, laugh inappropriately seeing their defenceless prey — certainly, we simply can’t ignore any of those incredibly precious facts and must include them into our show!” Vampires in this anime are boring (all of them, including Gothic-Loli-twins). The good guys aren’t especially intriguing either. Why the hell do we need so many characters, when no one of them tries to at least justify his or her presence? Why do we need to care about any of them?

All those cliche “what a twist moments”, that half-baked love line — virtually everything in Sirius The Jaeger basically screams “It’s nothing to see here, move on”. Virtually everything — but its visual. It’s drawn and animated really well. And it’s especially upsetting because P.A. Works can do so much better anime but wasted the team’s talent on that.

At least I learned one thing. I’m going to ignore all shows and movies which descriptions contain any references to vampires (even from Shaft, Gainax and P.A. Works) unless I’m positive that it’ll worth its time. 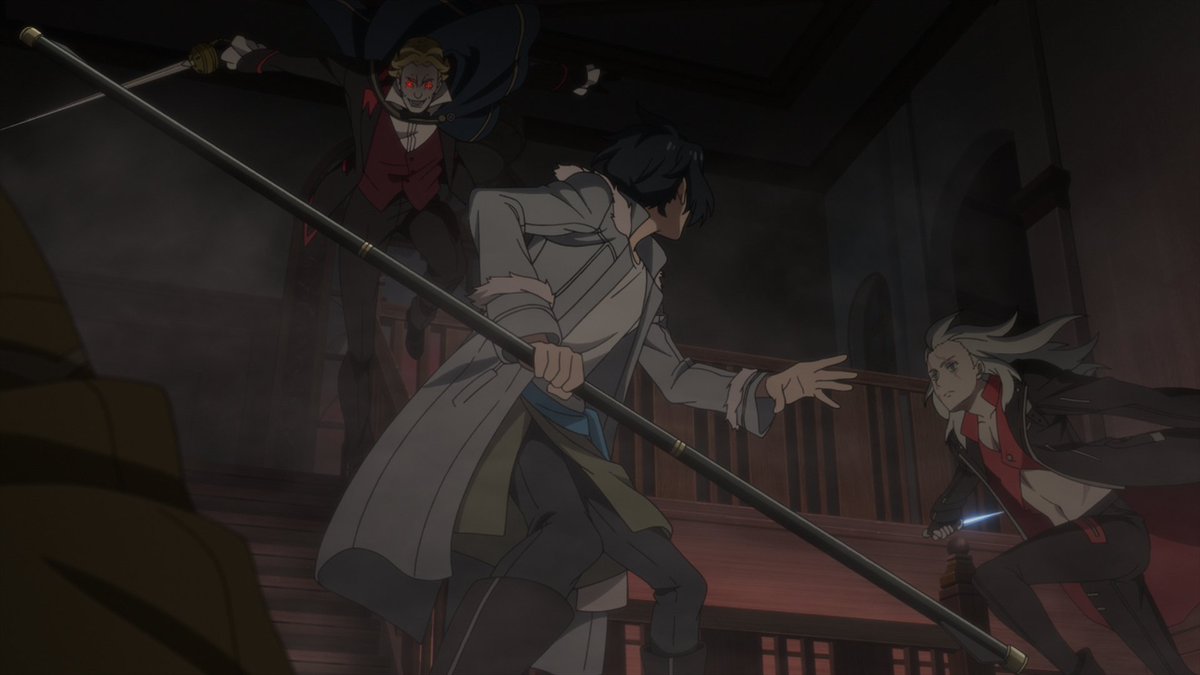 Irozuku Sekai no Ashita kara is illegally, shamelessly, indecently beautiful. I’m praying to all anime gods as well as Takhisis that it won’t be as terribly written as Violet Evergarden and we’ll be watching it without having to facepalm every minute (although it’s P.A. Works, so it’s impossible to predict whether it’s going to be an almost perfect show as Shirobako or some… Sirius The Jaeger).